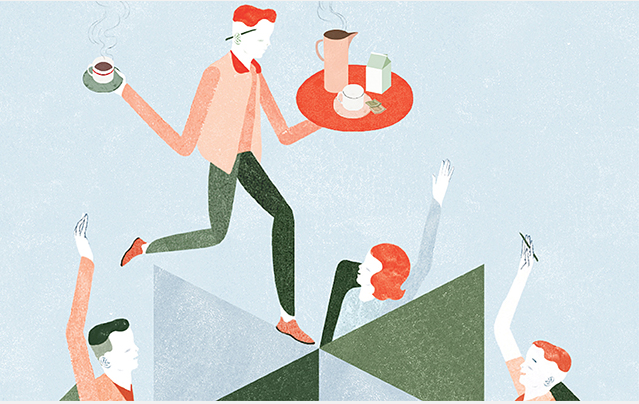 Those of us who fawn believe (unconsciously) that safety and acceptance comes at the cost of our own needs and boundaries.

Fawning, or people pleasing, is probably the least discussed and least known of the 4 Fs. Folks who fawn believe that safety and acceptance can be attained by matching our values, desires, and opinions to those of the people around us. We act as though in order to be in a relationship, we must sacrifice those pieces of ourselves that do not match the values, opinions, and wishes of the other person.

Webster’s definition of fawn is

“to court favor by a cringing or

In his book Complex PTSD From Surviving to Thriving, Pete Walker defines codependency as,  “a fear based inability to express rights, needs, and boundaries in a relationship, it is a disorder of assertiveness, characterized by a dormant fight response and susceptibility to being exploited, abused, and or neglected.” He also describes fawning as “The over listening defense.” For those of us who fawn, we feel it is safer to listen and to elicit information from the other person than to speak. We do that so that we avoid giving away too much information and so that we can learn about the other person so that we know what to say, how to present ourselves.

Signs and Symptoms of Fawning

Rules of Fawning – It is safer to…

As with the other responses to stress (fight, flight, and freeze) fawning starts in childhood. People who fawn often grew up with at least one caregiver with narcissistic tendencies. These children are often parentified.

The parentified child is involved in an upside down relationship with the parent. These children work to meet the needs of the parent, while dismissing or detaching from their own needs. The child takes on the role of a spouse or close friend, meeting the parent’s emotional, physical, or financial needs.

Another piece of Jess’s Story –

Fawning is certainly my number one response to stress. I learned at a very early age that safety could be found only by being agreeable and keeping my parents happy and that any indication of disagreement would end badly for me. I had no idea that this way of being was abnormal. We accept the reality that we are fed until we realize that there are other ways to be. Until we see alternative ways of being, we have no way of knowing that our situation is not the accepted or “normal” way to be.

I didn’t realize what was happening until about two years ago. I was at a holiday gathering at my mother’s and found myself doing whatever I could to keep her happy. She was clearly stressed by the dogs and people that were staying at her house and was using contemptuous language about my stepbrother’s wife as she was not offering to help with the meal preparations. If you read last month’s newsletter, you may remember that contempt is a sign of an activated fight response.

Taking my mom’s cue in regards to what was expected of me, I ignored my partner and newborn son, and fawned all over her, anticipating her needs, and tiptoeing around her to protect myself and everyone else from her rage. My behavior at that time presented challenges for my partner and we ended up having arguments whenever she wasn’t around. The unconscious anger that simmered beneath the servile surface was taken out in the safety of my relationship with him.

That visit was when I began to see the cracks in the mask she was wearing. That was the time I began to question “why is it my responsibility to keep her happy?” That was the first time I wondered what I could do with my energy if I wasn’t so worried about pleasing her. Who would I be if I wasn’t the dutiful daughter, doing whatever my mother expected of me? I then began to realize that my relationship with my mother wasn’t the only place where I was fawning. I realized that I do that in all of my relationships. I thought to myself “I am totally full of shit. My existence is a lie.”

Two years and an identity crisis later, despite my new found awareness, coping tools, and so much time and money spent in therapy, I still struggle with fawning today. In social situations, I tend to focus on the other person, leading them by asking questions and nodding and agreeing to whatever they say. My sole purpose in those scenarios being to take their perspective and validate them. In the last year or so I have become less agreeable, but also not disagreeable. I have still not found a way to feel safe disagreeing with a person. The place this shows up the most for me is with gossip and judgement.

I know that gossiping about people and judging them is not within my values. I know that my entire being suffers when I am involved in it.  That’s not to say that I never gossip or never find myself judging others. I still struggle with it, especially with challenging family members. Let’s face it, avoiding judgement and staying in unconditional compassion for others is a difficult task. Where I struggle the most is when the people around me engage in gossip, I don’t know what to do. I don’t want to upset someone by disagreeing with them or making them feel judged. Nothing’s more hypocritical than judging another person’s judgment, am I right?

All of that to say that the journey is long and I am still learning how to be me, or even who “me” is. Everyday is a new opportunity, a new experiment with myself. Each day I take note of what feels good, what feels aligned, and do my best to stay on that path. There are times each day that I veer off the path. When I become aware of the sensation of non alignment, I find the path again, come back to center, back to my breath, back to me. And I move forward.